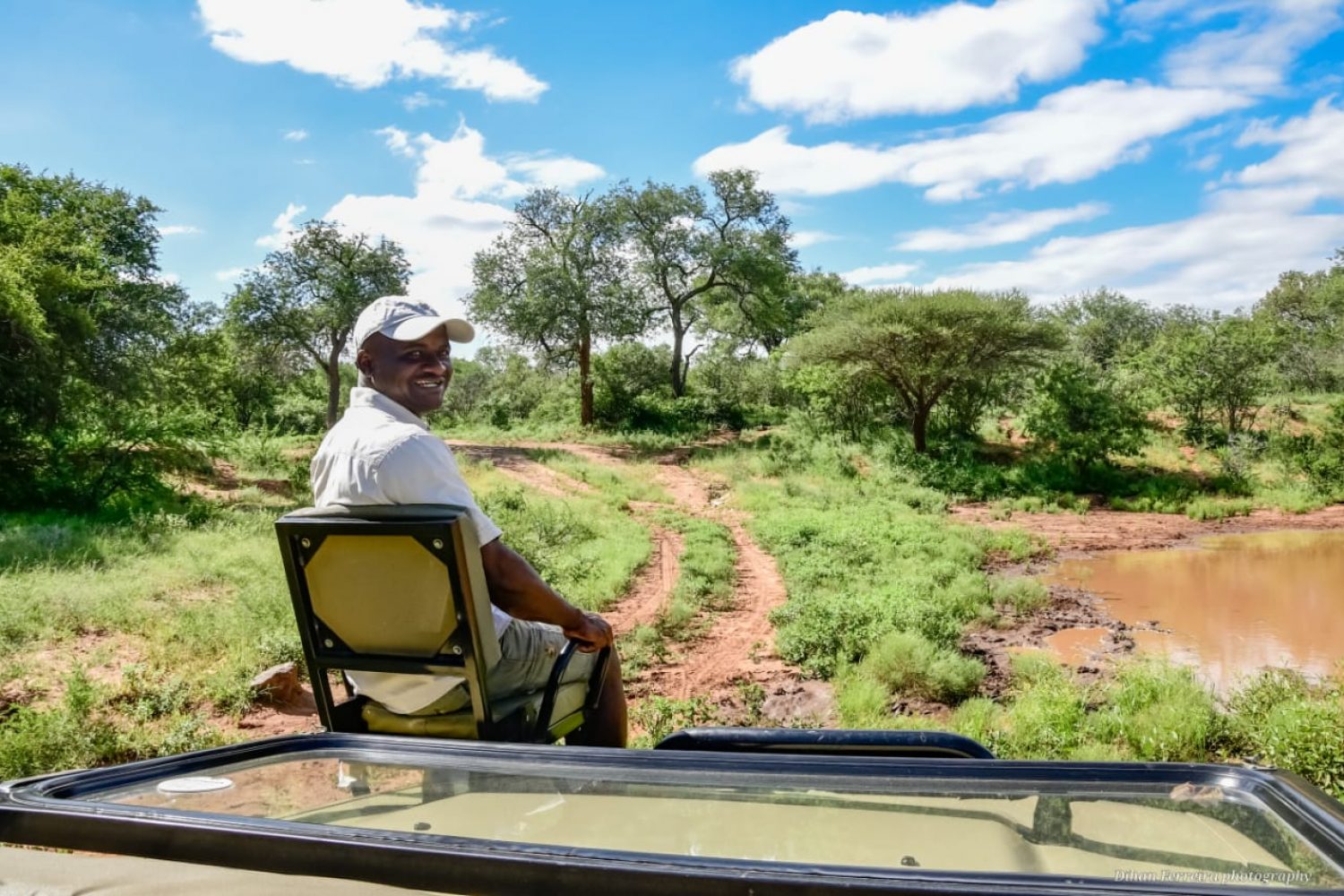 The common phrase ‘eyes in the back of your head’ does not appropriately describe Sam, our field guide.

I’d say eyes in the back, front and sides of his head plus some supernatural powers would be a more accurate description! After hearing about his childhood, however, it does not surprise me that Sam is a natural at his chosen career.

Sam was about ten years old, when the land reform program started in his native Zimbabwe and his father moved his growing family to the sun-scorched north-eastern corner of that country. Sam was assigned the role of chief donkey-keeper and was responsible for the safety of the family’s team of work-donkeys who were used to plough the land for their subsistence farming operation. It was on these donkeys that Sam taught himself to ride, which was to stand him in good stead in later years when he worked as a racehorse groom at Borrowdale Park in Harare. He still maintains that despite their grandiose names; Winter’s Night, Eternal Words, Earl of Surrey et al. were much easier customers than Jacket, Boots and Dozen who collectively laid claim to the phrase, ‘as stubborn as a donkey!’

Sam recalls those early years living amongst the elephants and hippos that constantly traversed the wild area from Mozambique, the Zambezi River and Nyamapanda. It was too hot to sleep undercover, so the family used to retire every night on the baked earth, under the stars, enclosed in a boma built of thorn tree branches. His father taught him to build a fire and the gentle flames would dance into the night, warding off the inquisitive hippos and elephants that came to the boma to investigate.

Falling asleep to the ascending whoop of a hyena most evenings, Sam says this haunting cry still has an effect on him. Dawn was the most magical time for Sam. He would quietly slip away from his sleeping family, excited to check out the tracks of their night-time visitors. He learned to read how fresh the tracks were, taking extra care of his beloved donkeys when the hyenas tracks were close by. “There were many animals, but no lions, and of course no rhino” says Sam. One of the biggest menaces were the striped polecats that used to attack their chickens and guinea fowls, but Sam confirms that he learned from this young age to recognize their putrid and unmistakable smell, before they could get to the chickens!

“Baboons, baboons!” he says slowly and despairingly “eeesh, they taught me my biggest lesson!” Sam’s father had planted a maize crop and he was sent to guard the stand of ripening maize, just a few weeks before it was due to be harvested. Sam recalls his young mind wandering. It was a still and scorching summer’s day and overcome by boredom he fell into a deep sleep, but still remembers the dream he had on that fateful afternoon about chasing baboons around a soccer field!

Drenched in sweat, Sam awoke to carnage, where almost every maize cob had been stripped and gobbled up by a troop of baboons, the maize field massacred with the ripening stalks lying in ripped shreds. Sam knew better than to go back home but his father came to collect him, finding a distraught child with a pool of tears streaming down his face. Undeterred by the waterworks, Sam’s father picked up a sjambok, and proceeded to lay into him, all the while screaming at him for not taking proper responsibility of the maize field! Sam remembers how he was not allowed dinner of ‘sadza’ (pap) and okra that night, with both his parents citing that the baboons had already eaten his dinner! His older sister, Joy hid some of her dinner to give to Sam later, but his father saw this sneaky manoeuvre and confiscated the illicit remains! Sam had not eaten all day and remembers feeling very hungry when he fell asleep to the hyenas calling that night, but agrees he learned one of the greatest lessons of his life. To this day, he hears and sees a baboon before it gets anywhere close to him or his possessions and boasts that he will recognise a baboon track with his eyes closed!

Sadly, Joy succumbed after a brave battle with cancer last year, but Sam has a lifelong souvenir that Joy left for him. He rubs a scar on his forehead as he tenderly describes his sister and the day that she accidently swiped his head with an axe, whilst the siblings were hunting for white-bellied field mice, that are considered a delicacy in Zimbabwe. Joy was busy digging out the burrows when Sam leant over to remove the soil and down came the axe on his head! Arriving home, with blood streaming down his face, Sam once again, had to face the wrath of his parents, although this time his mother was quick to get him to the local clinic where his wound was stitched.

The cache of mice was roasted and salted on an open fire, and on this occasion, Sam got his fill!