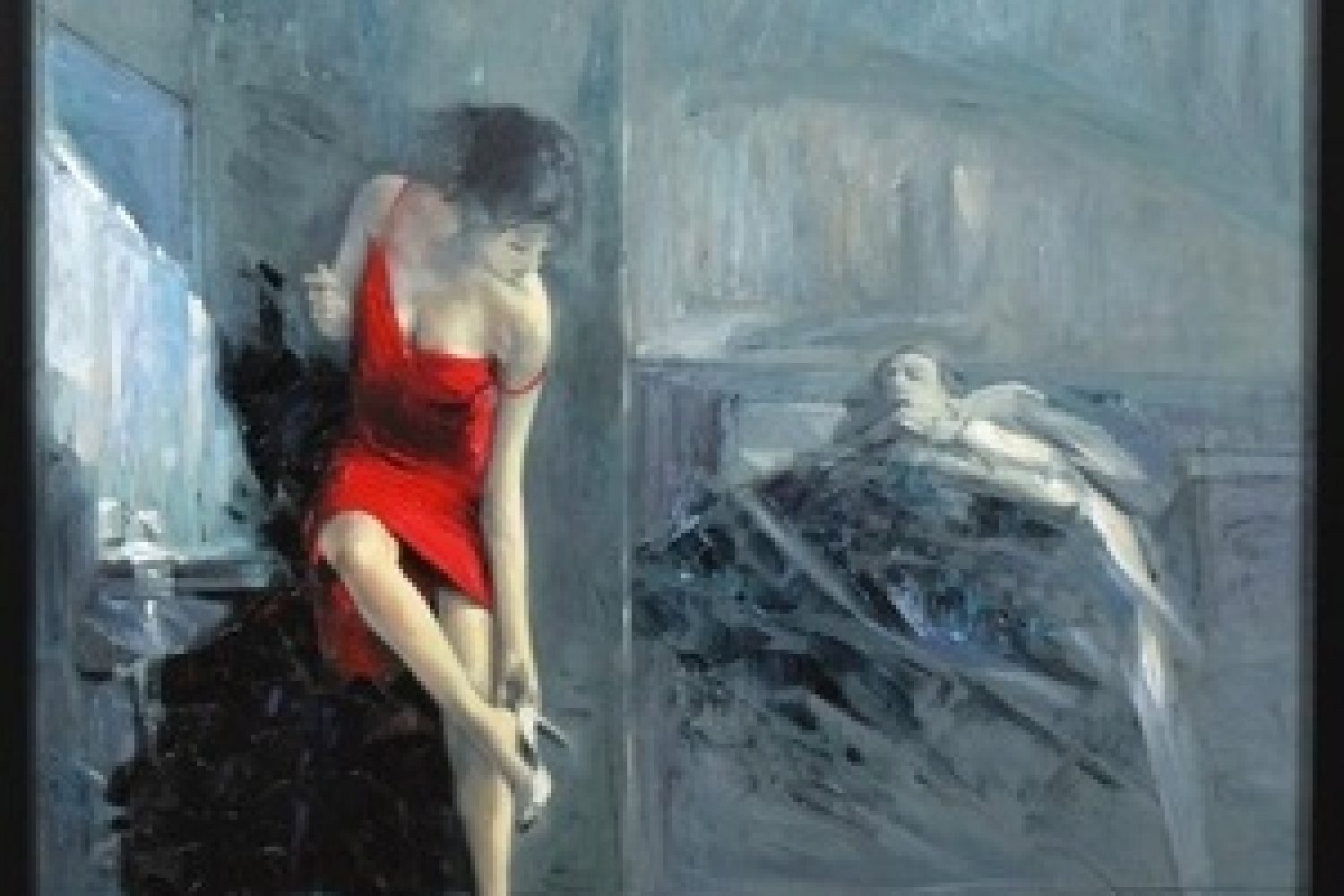 The walls of Khaya Ndlovu Manor House come to life through an eclectic mix of art.

Without doubt, the embellished Giclée that hangs opposite the guest bathroom creates the most discussion.

This appealing work of art by Italian born painter, Antonio Tamburro captivates the imagination as intriguing thoughts are conceived from the image that focuses first and foremost on an alluring woman. Conclusions are never completely drawn; ‘has she just arrived, or is she leaving?’

A Google search of this artist suggests that this painting was one of thirty-seven exhibited at Juliet’s house in Verona. Trevor discovered this piece in a shop window, whilst strolling down a pavement in New Orleans. He did not leave the shop until this canvas was safely rolled up, packaged and ready for the flight home! 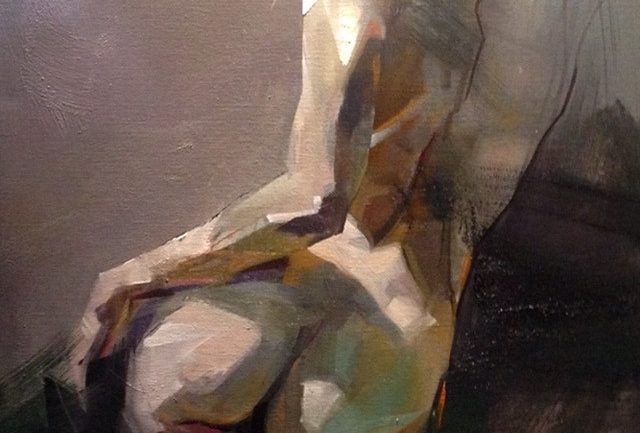 The blue tones of ‘Shilly’ is a study of ‘my hero friend’ depicted by Emily Lamb. Better known for her colourful washed paintings of wildlife, David Shepherd’s exceptionally talented granddaughter is one of the David Shepherd Wildlife Foundation’s wildlife art ambassadors.

Emily admits that her passion for art was instilled by her grandfather, who always shared his love of Africa, teaching her how to embrace the wilderness, which is so obviously evident in her emotionally charged wildlife paintings.

Emily gifted this beautiful, but uncharacteristic subject to Lisa, whilst she was living temporarily on the reserve in 2015. It came with a welcome proviso that Lisa make a donation to Rhino Revolution on behalf of ‘Shilly.’ It was captioned by Emily; ‘Shilly, wherever you are in this beautiful world, I’ve no doubt you’re pushing boundaries, and setting your local sphere alight with supernova wild energy….’ 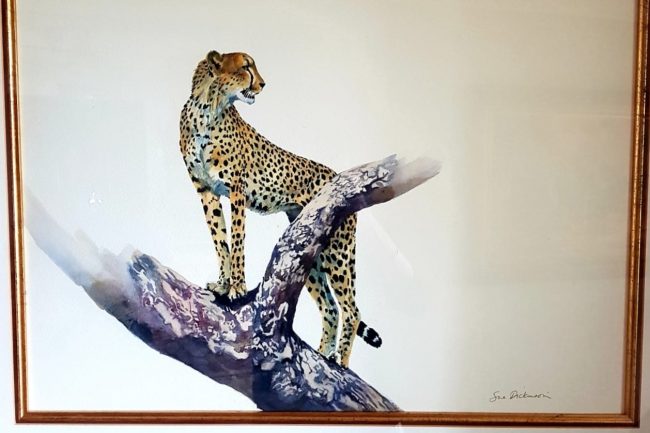 Sue Dickinson was widely regarded as one of the best South African wildlife artists of her generation. Trevor met Sue when she lived on the neighbouring Raptors View and acquired several of her minimalistic originals. Sue concentrated exclusively on the animal and used empty white spaces to convey the open expanses of Africa.

Shortly before her death in June 2019, Sue presented Trevor with the etching of the black rhino that hangs between Rooms 4 and 5, in appreciation of all his work done on behalf of the endangered species. Sue’s legacy will live on through her incredible artwork and the cherished memories that stay with so many.

Keith Joubert was internationally recognized for his extraordinary wildlife paintings that reflect his genius of the oil paint medium, and his intimate knowledge of the animals of the African bush. After his death from cancer in January 2013, Trevor dedicated Garden Flat 1 to this brilliant artist. Prints of his famous Big-5 collection that were commissioned by Rowland Ward Publications and based on actual records in the 20th edition of their Big-Game publication adorn the walls of this suite, as well as a print of a painting that was specifically commissioned for the Dugong Trust in Mozambique. An original Keith Joubert is found at the entrance hall to the Honeymoon Suite and remains one of Trevor’s prized possessions serving as a fond reminder of his hot-blooded friend

Entering the Manor House, guests are greeted by an original painting from Marina Louw, entitled ‘Any Fine Day.’ This large canvas was commissioned by Trevor for the opening of the Manor House. Marina was shown the spot where it was to hang and asked to paint ‘what she felt like.’ She has added her creative flair in capturing the entrance scene of the circular table, orchids, and chandelier, whilst the leopard probing a fruit bowl pays testament to Marina’s wild imagination! 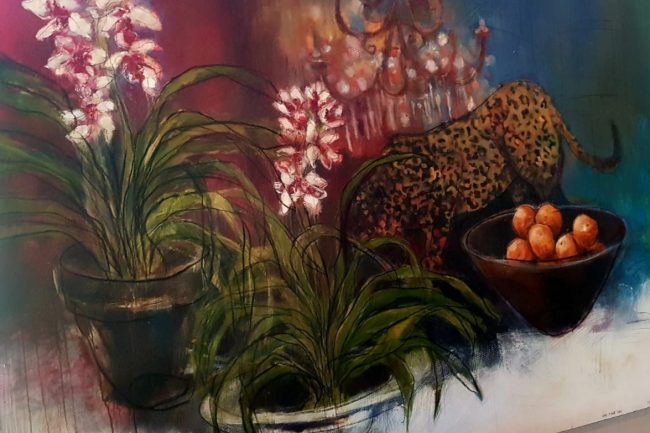 This South African artist was raised in Hoedspruit and worked as a fashion designer before following her passion and becoming a self-taught artist inspired by the wide wonderful world that surrounds her. By her own admission, Marina is spontaneous and full of surprises and describes her working style as messy and disorganised but with a method somewhere in the madness. It is no wonder, Trevor was shot down in flames when he asked her to touch up the dripping paint on ‘Any Fine Day’ “It’s meant to be like that!” she barked!

‘Sunset on Ocean Avenue’ is the Thomas Kinkade that hangs above the fireplace in the lounge. This was purchased by Trevor and Lisa whilst cruising the seas between Bali and Singapore. They fell instantly in love with the romantic vision behind this Carmel scene, in which the Californian town Mayor, Clint Eastwood is carrying a bunch of flowers across the street to his wife. The artist’s two older girls, Merritt and Chandler peer out of a vintage blue convertible while his two younger daughters, Winsor and Everett make their way across the street with their mother Nanette. She is also seen pausing beside her bicycle to watch an artist at work – that’s Thomas himself!

Thomas Kinkade emphasized the simple delights of life in his artwork, which included absolute devotion to his family. He often hid the letter ‘N’ in his paintings in honour of his wife, Nanette. This can be seen on the left side of this painting, a heart with the letter ‘N’ is carved into the wood just above the bell.

Debby Hart is a Zambian-born artist who is now based in Zimbabwe and is responsible for the magnificent large-scale portrait of the zebra on the deck. Debby is a master with chalk pastels, and such is her infinite attention to detail that guests often ask if this piece is an enlarged photograph! 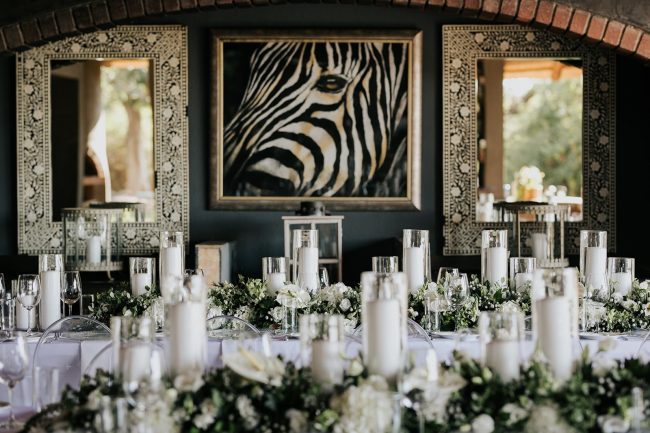 To capture the spirit of whichever animal she is drawing; Debby will spend hours watching her subjects in real-life. This painting was commissioned by Lisa whilst she was still living in Zimbabwe. A zebra has always been one of her favourite animals and this work of art was ordered to celebrate the seventh win of one of her racehorses, Carlton Hill, which she had purchased as a second-hand chuck-out! 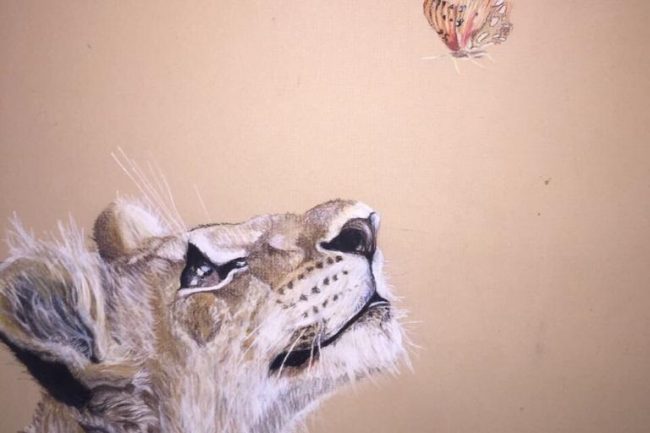 House was done by Jeremy Harris, Lisa’s son who was 18 at the time. After Trevor had declared in no uncertain terms that he had enough wildlife art, Jeremy was on his way out the back gate to deliver the chalk pastel drawing, named ‘Curiosity Killed the Cat’ to a potential home, when Trevor spotted it.

After a very quick negotiation, the inquisitive lioness was going nowhere and soon found herself taking pride of place on the wall of the busy passageway. 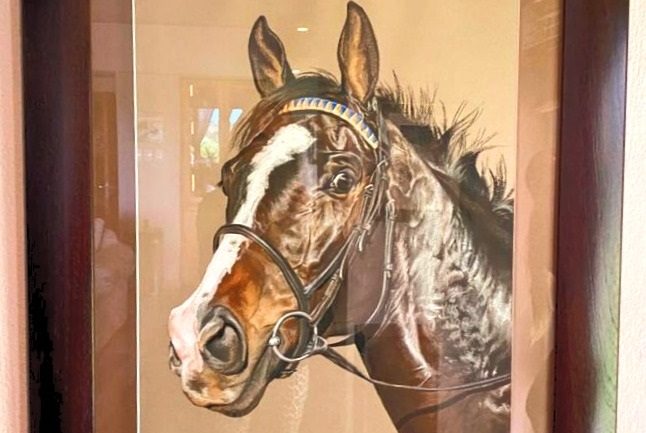 ‘Winter’s Night’ is one of Trevor and Lisa’s favourite racehorses, who after a very successful career on the racecourse joined the reserve’s horse-back patrol team. This chalk pastel was done by a young Zimbabwean artist, Natalie Hallows who photographed him after a gallop at the training track early one morning. Winter’s, as he is fondly known was trained during his racing career by Lisa and provided a mental lifeline to her during a time when she faced a firestorm in both her personal and professional life. He is therefore an integral part of the Khaya family and Natalie has captured his fiery character and rampant enthusiasm for life so perfectly in this chalk drawing that hangs proudly in the Manor House lounge. 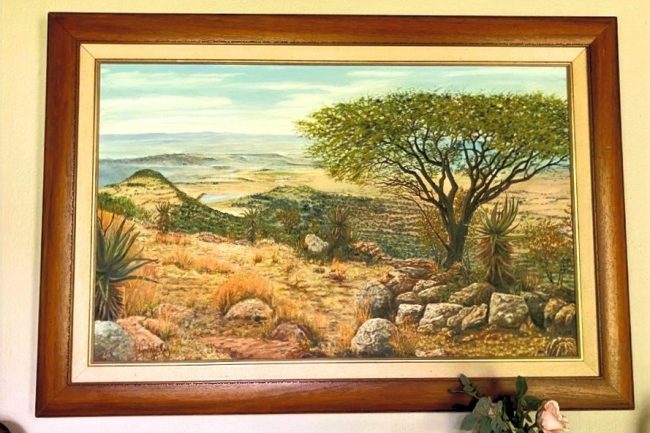 Over a century ago, Spion Kop was the scene of a bloody and futile battle fought between South African and British forces during the South African war from 1899 to 1902.

Trevor’s great grandfather who was the Commandant of the Pretoria Commando was wounded at Spion Kop, and later detained on Saint Helena as a prisoner of war. When Trevor happened upon this painting, which he recognised immediately as the ‘bloodiest acre in Boer war history,’ he thought it would be an appropriate addition to his art collection. Browsing the various pieces on offer at the Zoo Lake Art Market by the South African artist, Chris Watcham, Trevor casually remarked that he recognised the obscure hilltop in this painting. Chris replied that if he guessed it correctly, he could have the painting at half price! Trevor was delighted to acquire this piece that has historical relevance to his ancestors. Visiting Spion Kop is a very spiritual experience, the essence of which is captured in this original painting.

There are many other interesting pieces of art hanging in the Manor House, and whilst we have all heard the idiom that ‘every picture tells a story,’ sometimes the story behind the picture is that much more intriguing.

Come and discover it for yourself…