Love it or hate it. There’s a lot to be said about a winter break in the bush.

As an inherent shiverer, my first reaction when I was asked to write a blog about winter in the bush was one of trepidation.  Who in their right mind wants to dwell on winter, let alone read about it?

However, after settling down with a mug of steaming hot chocolate, despite the outside temperatures marching toward the upper twenties, it dawned on me just how lucky we are to chill out in winter, as we know it. Although the mercury drops to single figures during the early mornings and after dark, the Lowveld winters are defined by bright, crisp and clear sunny days, enhanced by the backdrop of the northern Drakensburg mountains, whose craggy peaks are usually drenched in brilliant light.

Game drives in winter take on a whole new dimension; it’s about wrapping in layers to  keep warm before catching the early morning sunrise, snuggling into the fleecy leopard-imprinted safari blankets stashed in the vehicles and absorbing the unmistakable aroma of the steaming Mochacoffeerula (exactly as described – chocolate, coffee and Amarula) during ‘puza-stop.’ It somehow tastes a whole lot better when the weather is chilly! The thinner bush makes for easier game spotting too, but it is not only about the multitude of animals that are seen picking their way through the crispy veld. It is also about the splash of vibrant colours that brighten the amber and golden hues of the winter bush, as the flaming red hot pokers and spectacularly pink impala lilies  wait for the cooler months to dress up and put on their show.

The breath-taking winter sunsets summon another enviable ‘puza-stop.’ With the pre-ordered gluhwein in hand, and elephants quietly rumbling  just around the corner, the peace is only disturbed by the ascending whoop of an adventurous hyena. Covered in more layers, the chilly night drive home is glorious for its uncertainty below a brilliant galaxy of shining stars splashed across the dark velvet winter sky.

The thinning bush of winter allows the resident garden monkeys to spot a predator miles away.  Their frantic chatter always signals that a hunter is looming and alerts us long before that cheetah, leopard, lion or pack of wild dogs arrive to sate their thirst at the Lodge waterhole.

Although the waterhole is a busy spot all year round, as the perennial summer puddles and wallows dry up, the fresh and constant Lodge pan water-supply lures greater numbers of wildlife and the winter months often provide an inclusive scene that could come straight out of a Disney movie! It is not uncommon to see splay-legged giraffes, zebras up to their knees in the ice-cold water, wildebeest cautiously edging closer waiting their turn, impalas daintily treading the water’s edge, mindful of what could be lurking below the surface, and warthogs wallowing, despite the chilly air.

Then there is the comfort food associated with winter. The unmistakable whiff of a char-grilled rump on the boma fire and the inviting aromas of a comforting oxtail poitjie, plus the hearty winter soups and  moreish tipsy tart and piping hot Amarula custard.  All Meals Guilt-Free, Of Course. It’s Cold!  Well, cold for the lowveld residents.  It is not unusual for the international, bikini-clad travellers to spend their days sunbathing, whilst their children, untroubled by the cooler temperatures, with chattering teeth, and goose-bumped bodies, splash around in the pool! 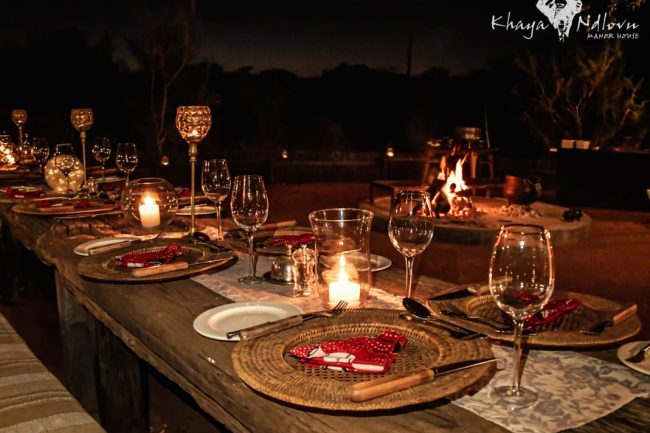 When the sun says good night and temperatures are falling, the fire crackling in the lounge fireplace brings a dancing glow into the heart of the lodge, encouraging a story-telling session over a glass of wine. As the last embers burn out, it is time to retire to the welcoming warmth of one’s winter bed. Sinking below the duck-down duvet, one realises that any negative thoughts about the cool season are misplaced.  There truly is so much to love about winter in the bush!