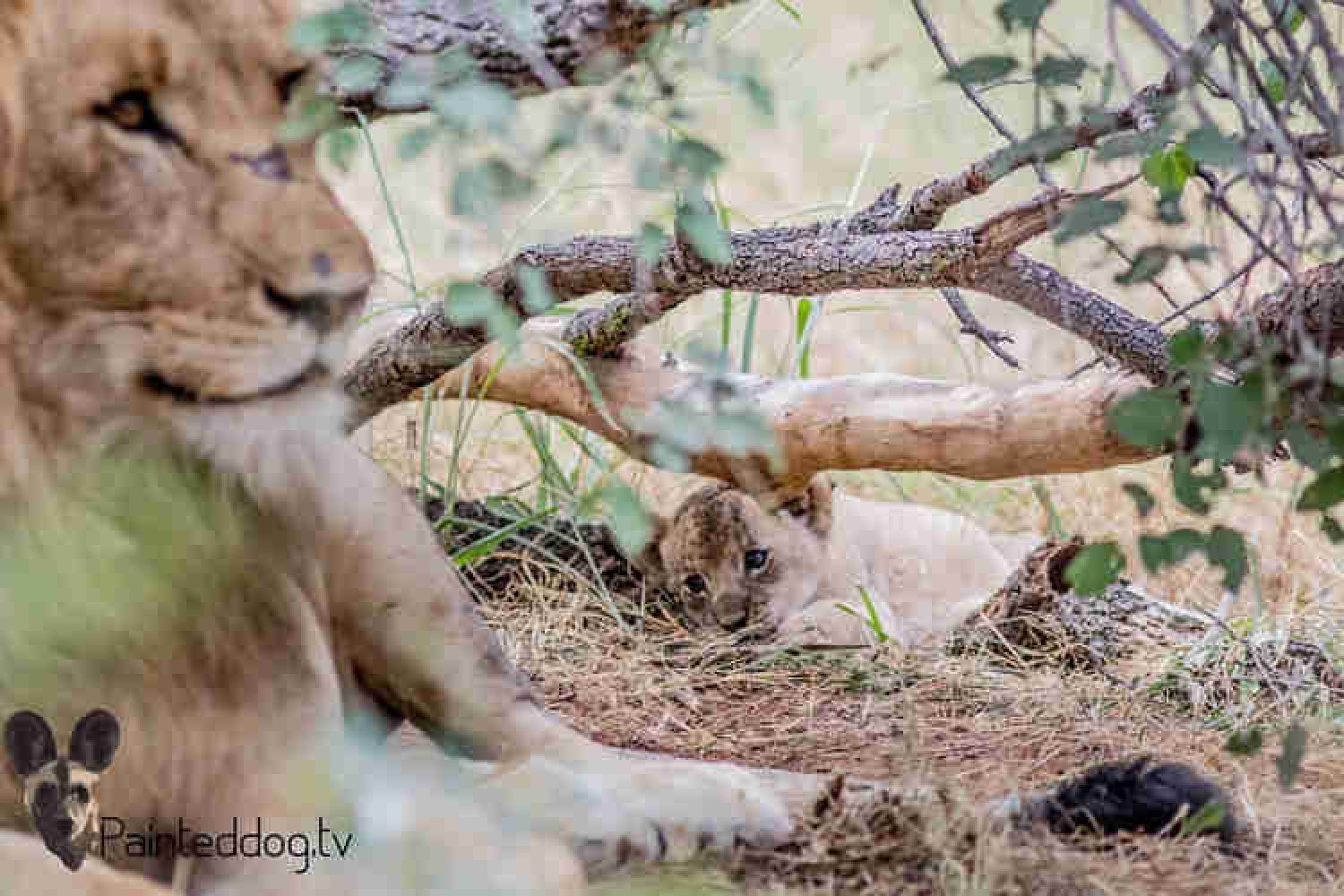 Bucket!… the newest buzzword on the Rietspruit Game Reserve!

It would be fair to say that every single member of the Reserve, as well as all the recent guests at the Khaya Ndlovu Manor House have held their collective breaths, for the best part of two weeks now, awaiting the outcome of the adventurous little lion cub’s venture away from the safety of her den.

Lionesses hide their cubs from the prying eyes and deathly jaws of other predators; hyenas, leopards, wild dogs and even pythons all pose a serious risk to the survival of a young cub. Adult male lions also kill cubs, even their own, so when the trio of male lions happened upon the lionesses’ den-site, covertly hidden in the thickets along the Diepsloot River, the future of the cubs did not seem bright. Less so, when the daring little female decided to leave the sheltered den and follow her father and two uncles onto the reserve!

It was Leadwood resident Kevin Leo Smith who first spotted the cub in the care of the three male lions on the 18 April. A frenzied WhatsApp message festival ensued over the next 10 days, as steady updates, including videos and photographs of the three burly boys taking care of the tiny cub were posted by various members of the reserve on the designated sightings group.

Moods switched from unbridled excitement to varying degrees of concern, and finally frantic pleas for intervention when the baby was seen trying to suckle one of the males. Her weight visibly dropping by the day, the emaciated little soul continued to follow the boys. It soon became clear that she had zero chance of survival unless some form of human intervention was applied, having been without her mother’s milk for the entire time that she had been with the boys. Normally, conservation rules dictate that no human interference is employed, and nature is left to take its course. The Rietsrpuit Game Reserve is a fenced area however, which means that human interference is certain, and the game needs to be managed. 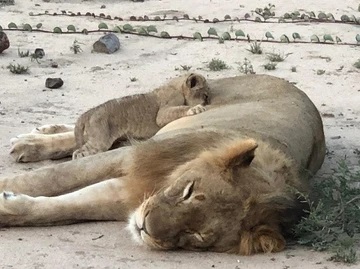 Considering this, Kevin called for the help of his son, Brent of Safari-live fame, and associate Wium Dornbrack, both of whom now run Painteddogtv. After locating the extremely well-concealed den-site, where a healthy little male cub fidgeted peacefully, they embarked on the very ambitious mission of trying to re-unite the female cub with her mother and brother.

The adult lions and the despairingly skinny female cub lay just 500 metres away! Assisted by Leadwood resident Glen Poole, Brent and Wium set about luring the lions closer to the den with the help of a freshly culled impala. All went according to plan, until the male lions chased the lioness, not only off her dialed-delivery, but also further away from her cub!

Alone and afraid, the cub understandably chose to hide away in the chaos! Brent and Wium set about searching for the baby, and although the sun had set, they miraculously managed to find her in the dark. Despite their own safety, acting in the best interests of the cub, Brent imitated the call of a lioness and managed to snatch the stressed infant from beneath a sickle-bush thicket, once she revealed her hiding place.

After wrapping her in a towel to avoid contaminating her with human scent, she was placed in a bucket (hence her new name) normally used for carting venomous snakes! The pair then delivered the frightened cub to her unseen brother at the den! Although dangerously close, the adult lions were engaged in their own carnival, thus allowing the Painteddogtv team to complete their mission! “I can’t talk now” whispered Brent nervously to his fiancé Jamie, when she called him asking about dinner! “there are lions all around! And no, I won’t make it home in time for dinner!”

Returning to the den-site at first light the following morning, Brent was dismayed to find the cub more-or-less where he had left her the night before, with no sign of the lioness or her brother. 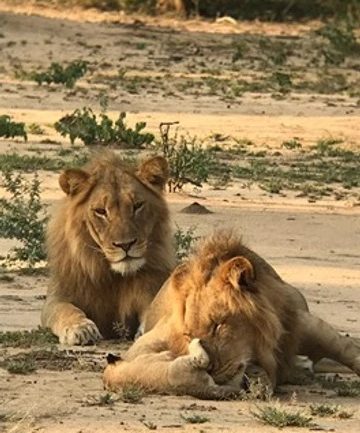 Night fell, and a check-up at the den revealed no change in the cub’s position. Then the male lions started calling on the steep bank above. This understandably triggered a desire in the lonely baby to join them, an outcome that needed to be avoided at all costs. Again, Brent simulated a lioness call, in the hopes that the distressed cub would remain at the den and wait for her mother’s return, but she was clearly determined to get back to the boys and continuously struggled to climb the steep upper reaches of the bank. Defeated and with heavy hearts, Brent and Wium eventually left the site, having missed dinner again!

Arriving at the den early the next morning to the disturbing shriek of francolins alarming, Brent feared the worst imagining a leopard or hyena had happened upon the den. But to his utter relief, it was the lioness who arrived, greeting the cubs and leading them off into the riverbed, where she fed and groomed both babies.

The attentive behaviour of the three male lions toward the cub is a puzzle that even the lion-experts have no answer for. The male lions did not leave her unattended for a second, even after successfully hunting down an adult giraffe; baby-sitting duties were shared between the three.

One of them would stay with the cub, a distance away from the carcass, seemingly to protect her from the scavenging hyenas and vultures that were earnestly lying in wait to get their share of the giraffe spoils.

Brent last saw the lioness and her two cubs heading west from the den-site. Thankful and relieved that the re-united felines could resume their happy-ever-after lives, he pinched himself, reflecting on the weekend’s events; a real-life drama starring himself, Bucket and the boys!