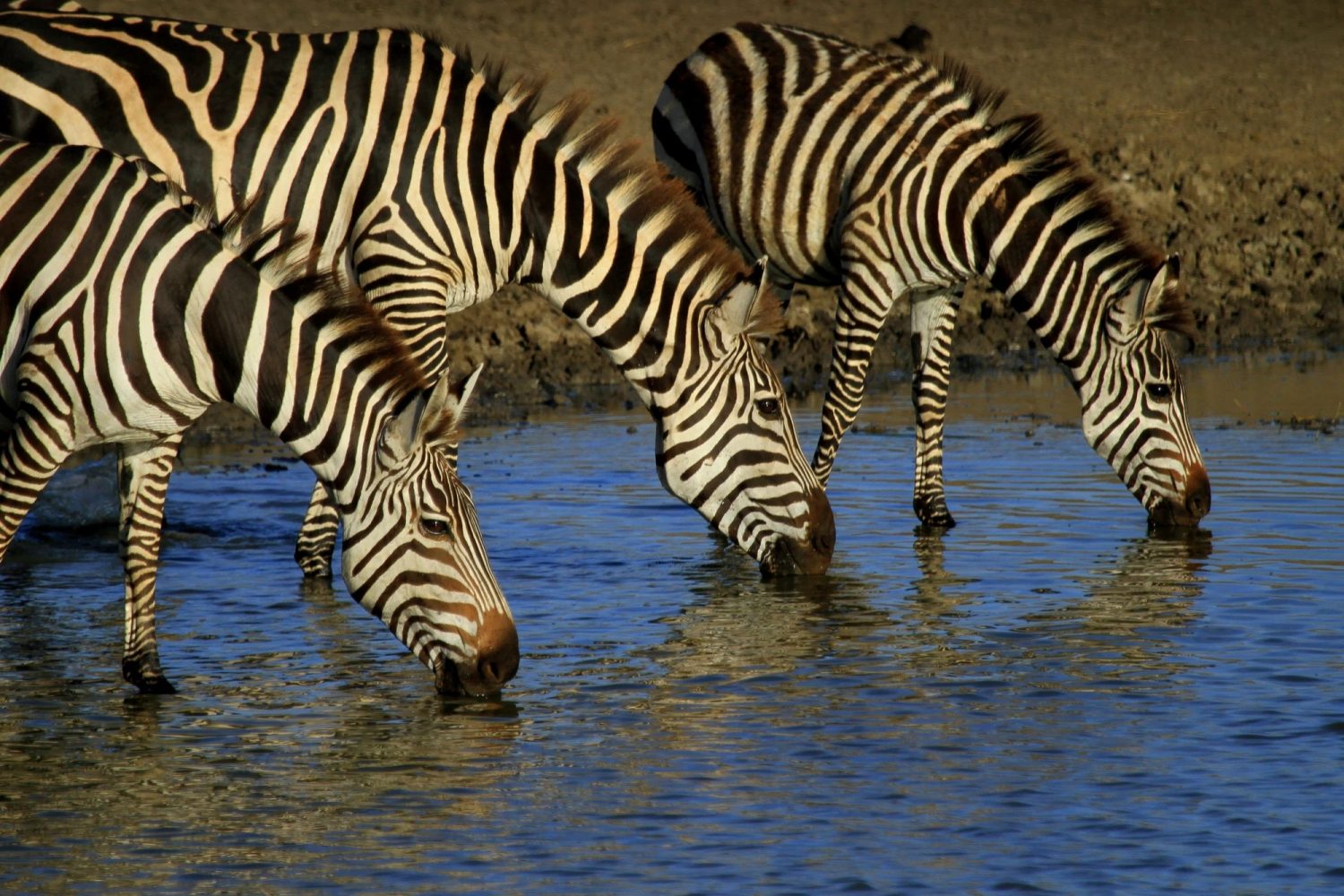 Who would have believed an innocent ‘herd’ of shiny coated zebras drinking from the waterhole in front of the Khaya Ndlovu Manor House could have sparked such a heated debate?

‘It’s not a herd, it’s a zeal!’ growled a usually placid Gabriel, our front of house manager.

‘It is not, it’s a dazzle!’ argued Shannon, and so progressed an interesting discussion where we all agreed that we absolutely love the imaginative collective nouns that have taken over from the boring old herd, pride and flock that we learnt at school in the ‘olden’ days.

It would seem as though almost anything goes now, providing there is some character reference in the collective. I am not sure that the Oxford English Faculty would agree to the various approaches employed by the field-guides, trackers, and guests on our game-drives; but their modernisation of many of the collectives sure has added a quirky development to the English language! 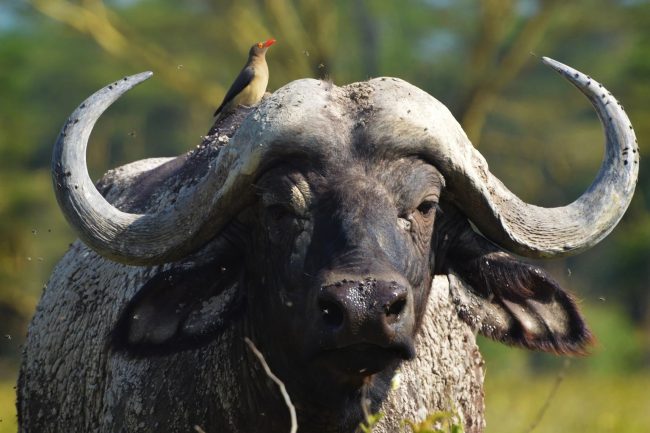 An obstinacy of buffalo could not be more appropriate for these fearsome looking bovines whose glassy eyes stare one down; superior and unchallenged! This is a great example of a collective noun that is inspired by the characteristics of the animal being described.

A tower of giraffe came about for extremely obvious reasons; however, this is only used when they are standing still. I have heard kaleidoscope as well as a journey of giraffes, which aptly describes giraffes when they are on the move! 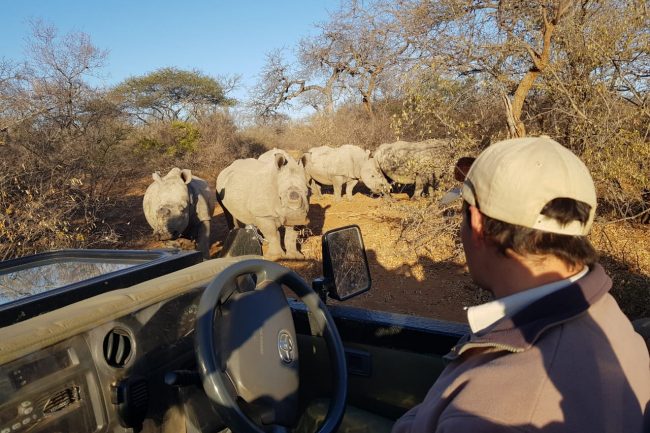 One of the most well-known of all collective nouns is a crash of rhinoceroses. This was most likely inspired by the black rhinos’ tendency to charge, crashing through the bush, but it is a little unfairly consigned to the white rhino who are generally placid and laid back. Sadly, target is a biting word that is often used for a group of rhinos these days; having been in the sights of the illegal wildlife trade for many years now. 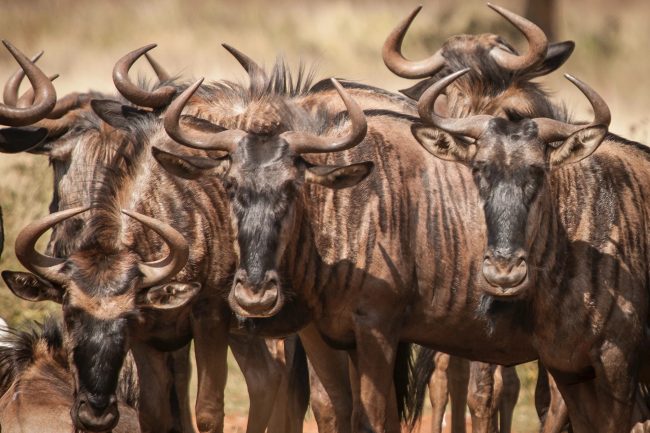 A confusion of wildebeest is a term used to refer to these migrant animals, originating from the noise and confusion that reigns during the large East African migrations. In this part of the world however, where migrations do not occur to the same extent, the word confusion aptly depicts the mix of physical attributes that make up the wildebeest, a zebra’s head and tail, a buffalo’s horns, an impala’s ears, and the body shape of a hyena! This assembly of body parts has also given rise to an improbability of wildebeest! 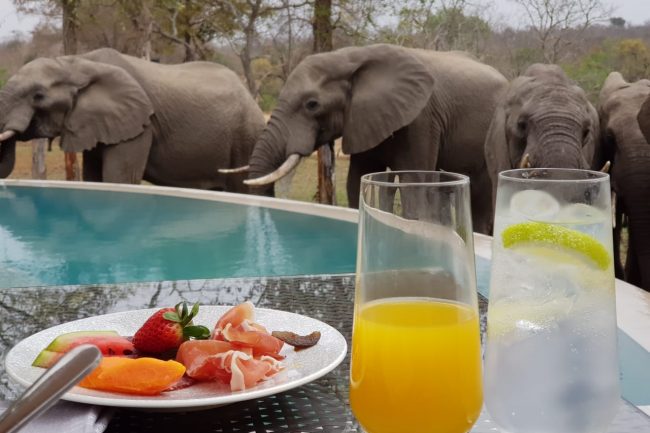 There is an old proverb that says an elephant never forgets, so it is no wonder that a group of these gentle giants refers to a memory of elephants. Although, not strictly proven that an elephant never forgets, scientists believe they do remember certain triggers, such as food and water, friends, and enemies, as well as pain. I have also heard the term a vanish of elephants, motivated by their ability to disappear, despite their imposing size, without a trace into the dense bush.

Anyone who has heard a cackle of hyena will understand how this collective noun came about, as it perfectly describes the chortling sound that they make when squabbling over a carcass. Although they may sound as though they are laughing, this is really an expression of frustration and warning. A clan of hyena is also accepted and more commonly used.

As porcupines have a large supply of needle-sharp quills with which to defend themselves, a prickle of porcupines is an obvious choice to describe these nocturnal animals. The quills are soft when the babies are born but harden within just a few days and can grow to up to 30 cm in length, lying flat and facing towards the rear. As soon as the animal is threatened or becomes annoyed the attractive black and white quills fan out in an erect and impressive display of armoury. 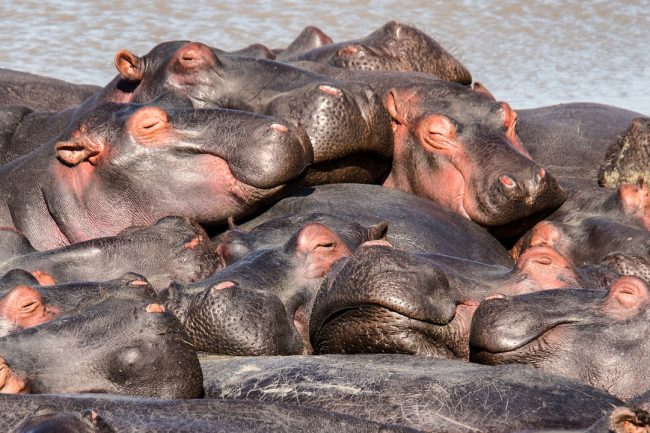 Whilst the reference to a pod of hippos has been around for ages, anyone who has witnessed these large semi-aquatic mammals chilling in a dam or river will agree that a bloat of hippos more aptly describes the collection. Hippos spend most of their day submerged in water to protect their sensitive skin from the sun. Despite their size however, they are graceful swimmers, and can hold their breath underwater for up to five minutes. 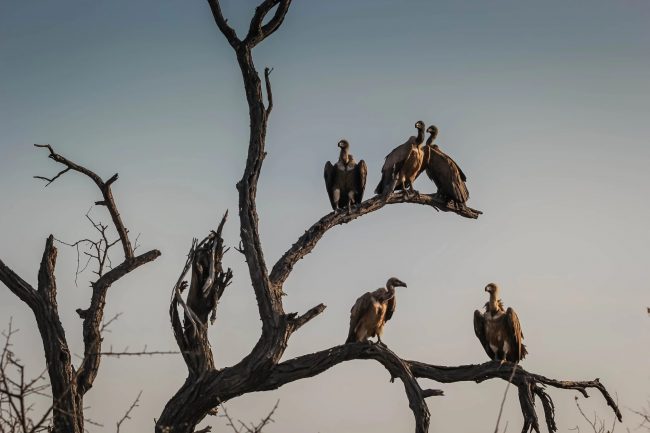 There are hundreds of other quirky collective nouns, but probably none more appropriate than the one referring to a wake of vultures, specifically used when they are feeding on a carcass. The less expressive term of committee is used for a group of vultures that is resting in a tree; however, a kettle of vultures aptly describes them whilst they are soaring on a thermal looking out for food.

So, if you are confused about where to make your next memories, contact us now to organise your journey to the bush. One word of warning though, once Chef Garth or Chef Prince have finished with you, you may also become part of a bloat!